44 pupils from 1st to 6th Form travelled to London for their annual London Theatre trip, which is in its ninth year. This was a fantastic opportunity for pupils to experience what London had to offer.

The itinerary started in Borough Market where pupils selected food from the many colourful stalls offering everything from giant cookies to a hog roast. After a wander along the River Thames, taking in the sights of the Golden Hinde and the Globe Theatre, pupils then made their way to the Shard building, Western Europe’s tallest building measuring 310 metres in height, to take the lift up to the viewing platform where the whole of London stretched out before them – the views were breath-taking.

After a meal at Pizza Express they made their way to the first of two shows, “Wicked” at the Victoria Apollo Theatre. Having great seats in the stalls, the group were enthralled by the music, lights, scenery, dancing and the moving story of the Wicked Witch of the West and her rival Glinda

Following a hearty breakfast at the hotel, the group made their way to the South Bank and were given a backstage tour of the National Theatre – which included the chance to try out various props and see how the magic on stage is achieved by huge teams of builders, carpenters, designers and technicians.

Lunch in Covent Garden was welcomed and eaten whilst watching the array of interesting and wonderful street entertainers, jugglers, magicians and string quartets.

Feeling excited with the bright lights of London, the students feeling inspired by the West End went on to watch their second show “School of Rock” – made famous by Jack Black in the film. The amazing energy and skill of the cast blew everyone away. The children on stage, who form the School of Rock Band, played their own instruments and were so impressive. Everyone left the theatre with a smile on their face! 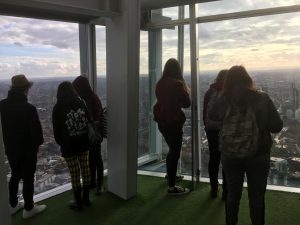 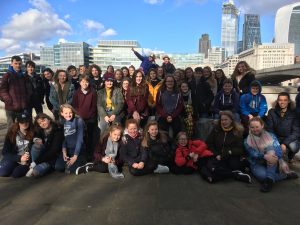