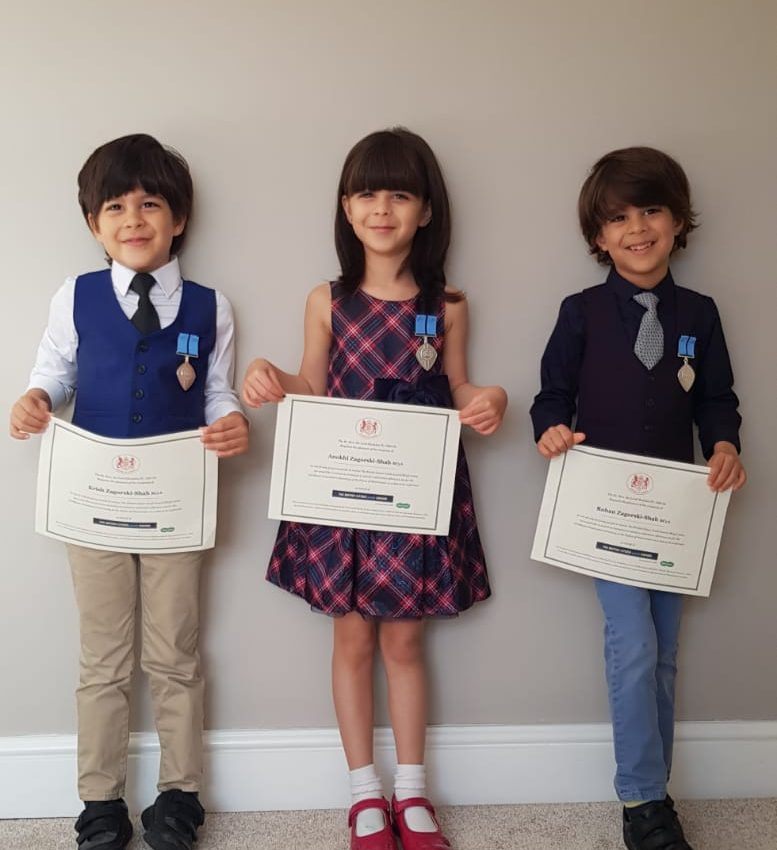 We are incredibly proud of Wisbech Grammar pupils Krish, Rohan and Anokhi Zagorski-Shah who are in our Prep 1 Class, for being part of  25 extraordinary young people from across the UK, being recognised with the coveted British Citizen Youth Award. For the first time in its history, the triplets and the remaining 22 medalists received their BCyA medals by courier together with a video message from some of the Patrons and an invitation to the House of Lords at a date yet to be determined, when it is safe to do so. The British Citizen Youth Award (BCyA) In association with Specsavers recognises individuals aged 18 and under, that positively impact others and highlights the positive aspects of multi-cultural communities, schools and places of education, community groups, and charities throughout the UK.

Krish, Rohan and Anokhi are triplets born 10 weeks early. As they grew older they started swimming to improve their muscle tone and lung capacity. At the age of 4, the triplets came up with the idea to carry out charity work for other children less fortunate. They were inspired to do a swim following their cousin’s charity swim. The completed and surpassed both their swim distance and fundraising targets, raising money for the NSPCC.

Their target to swim at just 4 years old was 200m, but they surpassed this swimming a total of 520m in 60 minutes. The trio raised £1270.75 for the East of England NSPCC where there are a number of vulnerable children within their community. In recent months since the start of the Pandemic, there has been increased pressure on the NSPCC. The triplets are determined to continue raising funds for the NSPCC and its important work. The inspirational triplets are already planning their next project, watch this space.

Messages of support were sent via video from TV personalities Michael Underwood, Matt Allwright, Tim Vincent, pop superstar Kimberly Walsh of the Pussycat Dolls, and popular comedian, actor and Patron of the BCA Bradley Walsh. Dame Mary also recorded a heartfelt message and has continued to support the BCA throughout the pandemic.

Dame Mary Perkins, Co-Founder of Specsavers and BCyA Patron said “These incredible young people are the rising stars of the future – let us shine a light on them and Celebrate! I hope that many more youngsters will follow in their footsteps”.

Co-Founder of The British Citizen Youth Award, Mike Faulkner said: “Whilst it is bitterly disappointing not be able to present Krish, Rohan and Anokhi’s medals in person, we are determined to recognise all Medalists for their exceptional endeavours. They will still have the full British Citizen Youth Award experience when we can safely gather indoors in larger numbers.

“The 25 medalists represent all that is good about young people today. Their commitment to others and to making society better for everyone, was the driving force for us to unite them with their medals at the earliest opportunity. Whilst some recognition programmes are regarded as elitist, the BCyA remains accessible to everyone and welcomes nominations year-round. By highlighting the commitment of young people like Krish, Rohan and Anokhi we aim to make a positive impact in the community the norm rather than the exception”.

Each Medal of Honour bears the words ‘For the Good of the Country’ and are presented to only a small number of exceptional young individuals annually. The British Citizen Youth Award is widely viewed as the nation’s way of recognising extraordinary, everyday young people for exceptional endeavor and are truly representative of today’s multicultural Britain.

Nominations are now being accepted for the 2021 medal presentations, register online at www.britishcitizenyouthawards.co.uk.