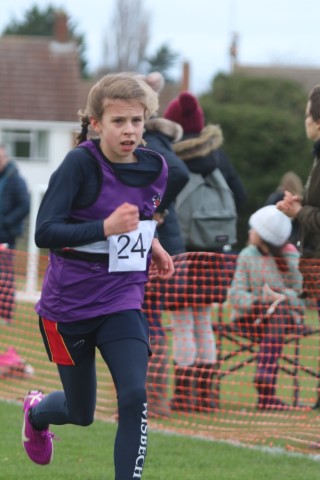 On Saturday 11th January 9 pupils from Wisbech Grammar School competed in the County Cross Country Championships at Netherhall School in Cambridge. Elyn Lauder was the first to run in the Junior Girls category, she ran well keeping a steady pace and finished in position 26.  The next race involved Charlie Tunmore and Oliver Taylor in the Junior Boys race, they both competed well with Oliver finishing in position 27 and Charlie finishing in position 31.  The Minor boy’s race featured Ackara Black and Edward Newman. Ackara started off strong leading the pack but sadly lost this position after half a lap, eventually finishing 23rd. Edward ran steadily in the middle of the group and finished in 43rd place.

The last race was the Minor Girls category with Millie Harris, Evelyn Brown, Robyn Thorp and Nina Fowler competing in this race. Evelyn, Robyn and Nina all ran steadily and finished in similar positions; Evelyn 38th, Robyn 43rd and Nina 44th. Millie however ran a storming race and finished in 3rd position which qualifies her for County Selection.

Millie will compete in the Anglian Cross Country Championships on 1st February at the Princess Royal Sports Arena in Boston.