Rugby was very much in the spotlight in the Lent Term with five sides representing the school at the National Schools Rugby VIIs competition at Rosslyn Park, five pupils gained representative honours, and the school also hosted an Easter camp in association with Premiership side Northampton Saints.

At Rosslyn Park National Schools VIIs the 1st VII and U14s VII both came within a score of qualifying for the second day, narrowly missing out to RGS Newcastle and RGS Colchester respectively. The 1st VII recorded impressive wins over Reed’s School, UCS and King’s Bruton, while the U14s took an almighty scalp as they beat rugby powerhouse Dulwich College. The poor weather disrupted the U13s competition while the U16s and Girls competed in tough draws, with the 16s facing Eton College and The Worth and the Girls coming up against last year’s runners-up, Sir Thomas Picton, and this year’s semi-finalists Reigate Grammar. 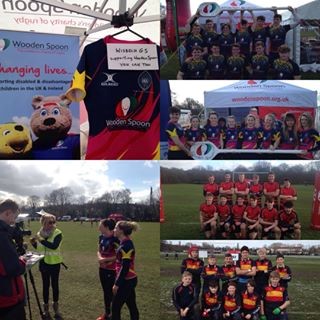 Following the Nationals the school went into the Easter break; however, it didn’t stop for a number of the Grammar Schools players. Henry Mair went into camp with Scottish Exiles, before joining up with the LAMBS U16s at the end of their tour, while George Dady toured with the LAMBS U16s as they played a three-game series vs Scotland in North Wales. The pick of the games was when Henry’s Scotland side faced George’s LAMBS side, with Henry taking bragging rights in a 14-10 win (two tries each). Further afield Oliver Mann, Jack Trundley and Bradley Hutler all toured with the LAMBS U18s to Croatia and Italy. All three of them started the two international games, vs Croatia U19s and Italy U19s B, where they won 99-0 and lost 21-50 respectively. With two more games in the middle the LAMBS won two and lost two, Jack and Oliver both scored two tries each on tour, while Bradley bagged ‘Man of the Match’ in game 2, vs Regionale Veneto, as well as the ‘Player of the Tour award’. Oliver and Bradley were both selected for the final LAMBS game vs Gloucester rugby on Sunday 22 March. 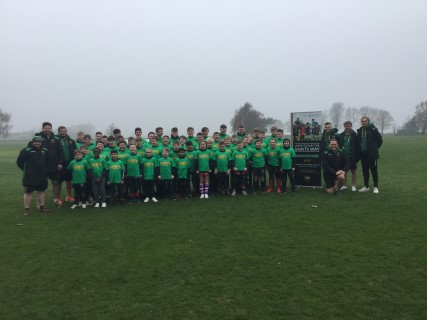 Closer to home, the end of Easter saw the school host a Northampton Saints Easter Camp with 54 boys and girls taking part in a three-day camp run by the Premiership side.

Simon Leader, Rugby Development Manager with Northants Saints said “We are very pleased to be working in partnership with WGS and excited about the facilities the school has to offer young people. The camp has been a great success, and we have already picked out some children that have shown great potential and recommended for our ‘Development Player Pathways. We are keen to extend our camps and reach out to more young people in Wisbech and surrounding areas. With this in mind, we will be running more camps at Wisbech Grammar School in the summer holidays 2018. We aim to identify talented young people and support them in their development of the game. Working in partnership with Wisbech Grammar School, we are excited about the future of Rugby in this area”. 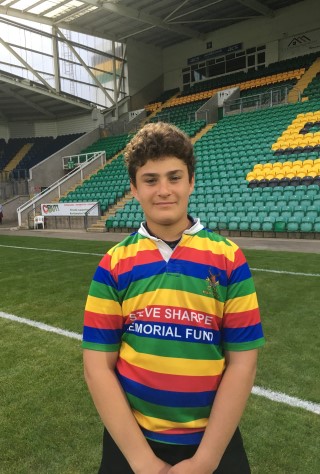 Ashton Webb was also selected in the final squad of 20 to play in the U13 Northampton Saints DPP Festival for the Hunts & Peterborough DPP. This selection was made after months of DPP sessions where an initially selected squad of 45 was whittled down to the final 20.

They played at Franklin’s Gardens May 17 and were against DPP teams from Bedfordshire and Northamptonshire; Ashton played all three games at number 8 and captained one of these games. In the first game, he scored the only try for his team on the Franklyn Garden stadium pitch. The festival saw some amazing individual and team performances on display at the home of Northampton Saints.

“It has been an extremely busy and successful season for Wisbech Grammar School rugby, both with the XVs and VIIs sides, as well as for a variety of individuals who have gone on and made representative honours. I am also delighted with how our relationship with Northampton Saints is starting to flourish, with a number of boys in their DPP set-up and a hugely successful Easter camp held at the school.  For the individual pupil, the range of experiences that they have, as well as the wider support they receive, such as Strength and Conditioning and medical support, allows them to develop within our programme. It is great to see them gain recognition outside of this, be it with representative honours with Scotland and the LAMBS, or via the county set-up or Northampton Saints Academy DPP programme.”