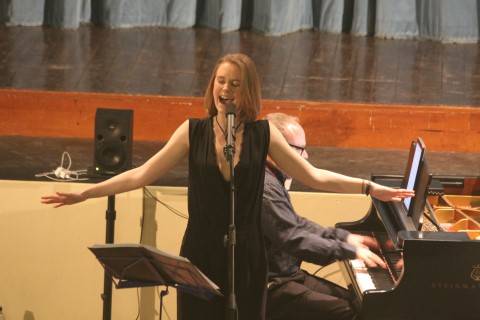 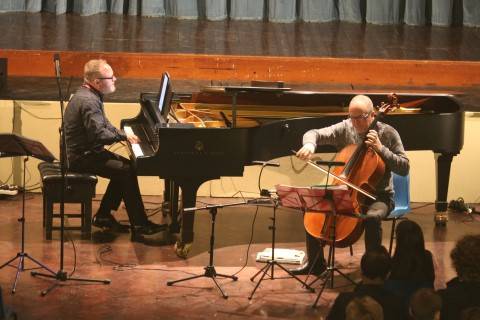 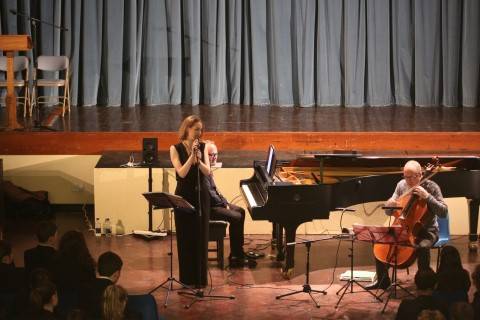 Ella McCready recently graduated from the Rose Bruford Theatre School, where she studied acting. Joining her to make up the trio were her father, Ivan McCready, a concert cellist who studied at the Royal Academy of Music, and their pianist, Ian MacGregor, an Oxford graduate who has had lots of experience performing in West End musicals.

The Trio accepted our invitation to perform for 1st to 5th Form pupils, so following the Womens’ Society assembly to celebrate International Women’s Day, the Russell Hall was full. The programme included arrangements of well-known numbers, such as Adele’s “Feel my love” and Aretha Franklin’s “Natural Woman”, played and sung with style and finesse. Alongside these Ivan performed the moving “Vocalise” by Rachmaninov, which had everyone mesmerised. Jazz was also on the agenda with Nina Simone’s “I wish” and Etta James’ “At last”.

Pupils were reluctant for the concert to finish and could have happily listened to more. After the show Ella, Ivan and Ian met with some of our pupils to share their experiences of working in the music industry.  Their advice was hugely helpful to those pupils considering applying for drama school as actors, musicians or directors. The clear message from Ella was, “If you love it, go for it!”