WGS dominated the first half of the match against Lincoln Minster School. Harvey Davies and Kaan Arslan were assured at the back. Alfie Hoyles had his best game of the season so far in Centre Midfield and was ably supported by Joseph Miller and Oliver Taylor down the wings. Mason Slender opened the scoring with a well struck short corner from the top of the circle but Lincoln Minster constantly posed a threat from a quick break and were able to score an equaliser from one such attack, just before ​half time.

The half time team talk focused on being more dynamic, with better decision making, especially in the opposition circle. I was delighted to see that we scored three super goals in the second half; Joseph Miller scoring two and Mason Slender also scoring his second in the match. Thomas Brett worked tirelessly for the team up front, and there was a real energy and vibrancy to the team which bodes well for the rest of the season. Well done boys.

Thank you to our supporters and to Lincoln Minster for hosting the matches.

After playing against St Hugh’s last week at the Stamford tournament, we welcomed them to WGS for an U11A, B & C team fixture. The A team played 3 x 15min thirds, with the B & C team alternating halves on the other pitch. The B team played well throughout, with St Hugh’s securing the win with a last-minute goal. Playing their first game of the term, the C team put their training into practice, pressurising the opposition into making mistakes, which was duly rewarded with a last minute goal.

Having lost to the St Hugh’s team last week at Stamford, the A team were looking to turn the score around. Having worked well during training on setting a team defensive formation, the WGS team started well, both in terms of pressing the opposition higher up the pitch and quelling any attacks, a completely different performance to last week. After a series of attacks, WGS took the lead with a well-worked team goal scored by Sam Ludlow. This remained the only goal for the first two thirds, which saw both sides defending their ‘Ds well. Louie Stephens-Foster in goal producing a number of fine saves to see WGS keep the lead.

Into the final third and with St Hugh’s tiring, WGS took their opportunities with Jules Jamieson scoring four goals, capping a fine individual performance. A really pleasing performance and one that showed the team are making progress in gaining a better game understanding. Thanks to all the parents for their support on what was a bitterly cold and windy day.

The U9A team played against Glebe House Preparatory School on Friday 2 February. The game was well contested by both teams who created an equal number of chances. It was Wisbech what made the most of theirs by breaking through the opposition’s defence. Goals came from Oliver Beck and Kai Peggs.

A positive end to a great day of hockey for the under 9A team.

The U9B team players had a fantastic day of hockey! The children played in small teams of 4 made up of both prep 3 and prep 4. Over the course of the afternoon Wisbech managed a total of 6 wins; with two groups finishing undefeated against respective Gresham teams.

The children had a brilliant day developing their stick skills, teamwork and understanding of the game. They should feel extremely proud of their performances as this sets an excellent platform for future development.

Following recent productive training sessions, the team were keen to get on the pitch and put into practice the new skills and systems of play. It took a while for the pattern of hockey to settle, but after a shaky 10 minutes WGS soon found their rhythm and started to move the ball well, with improved ball speed and ball retention. Will G, Bailey, Will H and particularly Toby were solid making timely interceptions, showing greater confidence when distributing. Shen Wei distributed well while and Harry, Jack and Yusuf worked hard, linking well with the forward line and using the ball intelligently. Josh, Jamie and Jacob, interchanged well off the ball and showed greater attacking threat than previous weeks. The goals were scored as a result of quick interplay and high ball speed throughout the whole team. Bedford could not cope with the quick fast flowing hockey and hard work shown by the Wisbech team at times, the aim now must be to build on this performance, fine-tune the running lines in preparation for the stern test to follow after half term.

Meanwhilst, away at Bedford Modern, the U13As started the game well, using the ball to good effect. It was pleasing to see the midfield quartet of Joseph Miller, Alfie Hoyles, Oliver Taylor and Mason Slender working hard for the team by pressing the ball when we were not in possession, tracking back well to help the defence and making themselves available to receive the ball. The first half was very even, with both sides having chances to score. Joseph Bly in goal made two excellent saves and also distributed the ball to good effect with both feet.

At half time the boys felt that their decision making, especially in the opposition circle could be sharper and more clinical so I was delighted to see a fast flowing move down the left side gave Oliver Taylor possession at the top left of the circle where he beat his player and passed well to Alfie Hoyles who struck a tremendous strike into the left hand corner of the goal, giving the keeper no time to react.

Bedford continued to be dangerous, especially on the break, but Kaan Arslan and Harvey Davies are developing into a very strong defensive unit. Mason Slender had a great game and thoroughly deserved his goal which was another well taken shot from the top of the circle. Well played boys.

The U13A Netball team travelled to Beeston Hall with a changed line up due to illness.

The courts were a little bit slippery so it wasn’t easy to make a good change of direction. A great start from the whole team and our defensive unit made it hard for Beeston to get a pass into their shooters and we came away with lots of possession. Some good work as well in the attacking end to find Sharon and Alana in space and a very comfortable quarter going ahead 6-1. Beeston woke up through the rest of the match and challenged a lot more making the remaining quarters a lot closer. At times the girls were running away from the ball and lacked the strength in the pass so balls were intercepted easily. We kept working on getting arms over the ball whenever we didn’t have possession & this put huge pressure on Beeston who quite often held the ball too long. Tia and Octavia worked hard in the defence D and forced the shooters to put up long-range shots which often went off. Unfortunately, we struggled to get the ball out from the defence goal line at times with no clear choice of pass available. The team stayed the same except in the last quarter when Alice and Jess swapped positions. Due to the great start in the first quarter, Beeston were unable to pull anything back & the final score was a 20-11 win to us.  Qtr scores: 6-1; 9-3; 15-6; 20-11

Player of the match was Tia at GK who tracked the GS really well that Beeston struggled to find a safe pass in. Tidied up on the contact & obstruction to have a much cleaner game and was able to get lots of tips throughout.  Coaches player is awarded to Olivia at WD who had another impressive game tracking really well and picking up some good interceptions. Was always able to get her feet round and mark her opponents pass which meant they often struggled to feed into the shooters.  A very solid game again for the U13A’s much tougher opponents but another good win. Lots of things to work on in the weeks to come as the matches get more challenging.  MVP Tia MacNab

Other matches at Beeston included the U13B who won : 16 – 4 with MVP awarded to Erin Shearman and the U9As came away with a 19-0 win which is a fantastic result 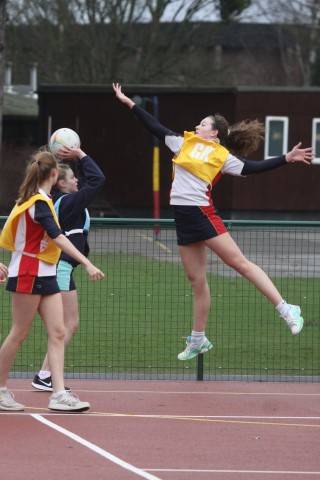 Following a good week of training, working on making definite drives and taking on our opponent in small space, the U15 Netball team put out a confident performance in their game against Wymondham College.

We started strongly, winning the first quarter 8-2 but knowing we could still play with more intensity. At half time the score was 20-4, following an excellent display of defensive pressure and quick breaks after a turnover. Throughout the second half, the team continued to work hard and take many interceptions over the court. However, Wymondham had made a number of positional changes, which we took a few minutes to adapt to. The final score, after a shortened second half was 29-10. A very pleasing performance for the whole team.

They Greyhounds came away with a 29-26 win against Wymondham following another strong performance. They dominated the first two quarters but allowed Wymondham back into the game in the third quarter. In the 4th quarter they showed great resilience to hold on and win by 3 goals.

Both teams were trying to play far too fast and didn’t have the ball under control so possession was back and forth. The U14’s had some moments of excellent play where they managed to keep control and get the ball safely to the shooters so just edged into the lead 4-2.

In the second quarter, Issy came on at WA although the U14’s really tried to slow the ball down they still lost a lot of possession as players were running away from the ball. Emily was able to pick up lots of interceptions in the D as the opposition continued to launch balls into their shooters. The lead was extended to 8-2.

In the third quarter, Sophie came on at WD and Imogen & Megan switched. There was quite a few shots missed this quarter as they had a very tall defender so it was hard to shoot over the marking arm. Again there was some good play but overall play was rushed. 3rd quarter score 12-4.

In the last quarter Sophie moved to WA and Alice came back on at WD, Megan went back to GS with Imogen at GA. Finally, the girls were able to play some good netball moving the ball around and timing the movement much better. The final score was a 17-6 win.

Player of the match was Emily Thomas at GK who picked up a huge amount of interceptions throughout the match always getting ball side and making it difficult for the shooters. She was also really trying to encourage her team mates to slow the play down and think about their passing. MPV was awarded to Emily Thomas