26 pupils travel to Germany and Poland

The Psychology, History, German and Government and Politics departments joined forces in December, to take 26 pupils to Germany and Poland.

Starting in Berlin, pupils visited the Berlin Wall memorial and learnt about the Cold War and what life was like in East Berlin. After watching videos about how difficult it was to cross from the East to West and learning about the creative escape attempts at Checkpoint Charlie, the group were given a guided tour of the old STASI prison, where people who went against the Soviet control, were physically and psychologically tortured. It was at this point that the reality and brutality of the regime really became obvious. This element of the trip finished with a walking tour by a local guide who described the fall of Communism.

Looking at Nazi Germany, we started by visiting the 1936 Olympic Stadium, imagining Hitler showcasing the supposed superiority of the Aryan Race, whilst in contrast, seeing Jesse Owens’s name engraved on the gold medal plate. We continued the journey by visiting Sachsenhausen, 15 minutes from the centre of Berlin; this was the model for all future concentration camps across Europe and where human experiments took place. Before leaving Germany we visited the Jewish Museum and numerous memorials, including the very sombre memorial to the murdered Jews, covering 19,000 square meters and comprising of 2,711 concrete blocks. Inside the Museum were a number of walk-in installations dedicated to the victims of the Holocaust. Our time in Germany ended with a visit to The Reichstag, Hitler’s bunker, The Brandenburg Gate and a few of the world-famous Christmas markets.

By travelling overland from Berlin to Warsaw and then on to Krakow, pupils began to understand the sheer distances involved when people were ‘resettled’ to the East (extermination camps). Warsaw allowed for the opportunity to see the Palace of Culture, built by Stalin.

Our time in Krakow was spent admiring the Old Town which is now a UNESCO world heritage site with a beautiful Medieval Square, made even more attractive by the Christmas lights. Pupils were taken to the former Jewish district Kazimierz, a Synagogue and a Jewish graveyard, learning about what life was like before and after the war. 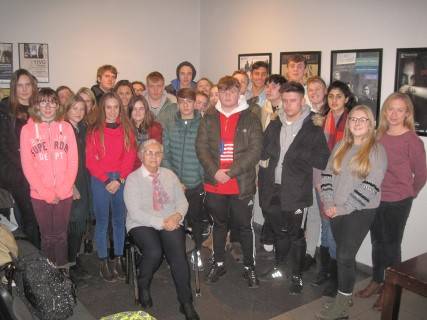 There was a trip to Schindler’s factory and the Galicja Jewish Museum, with personal stories and replica Ghetto walls.

The most poignant part of the week was a 6-hour guided tour of Auschwitz-Birkenau followed by a talk from Lidia Maksymowicz, a lady who was imprisoned in Auschwitz for two years as one of Dr. Mengele’s experimentees, as her family had been accused of talking to the Polish resistance. She spoke about day to day life in the camp, being adopted after liberation by a local Polish couple and later, playing with dolls, lining them up and sending them off to either the gas chambers or the barracks, as if it was a normal activity. Seeing the extermination camp where Lidia lived and then hearing a first-hand account of the emotions involved and the recurring nightmares she still has to live with, will always stay with us.